”In Carniola he grew up and bred his bees, in Vienna he wrote and taught the noble ones”.

Anton Janša was born in a simple, peasant family, on the 20th May 1734 in the village of Breznica in Upper Carniola region (part of the Austro- Hungarian empire, today Slovenia). His birth house, positioned next to the apiary, was preserved until 1907.

Anton’s father Matija Janša, locally known as Matija Kuhar, erected a wooden apiary beside their new cottage and barn in Breznica. They filled it with traditional Carniolan beehives, the speciality of which were the unique hand-painted front panels which were painted by the Kuhar children in the family barn.

The Kuhar’s old apiary stood until 1877 when they constructed a new one. Slovenian beekeepers later erected a reconstruction in the place where Janša’s original had stood – Janša’s Memorial Apiary.

Apiaries are covered, usually wooden, buildings that are intended for the life of bees and for beekeepers’ work. Beekeepers place hives and store beekeeping equipment in the apiary. In Slovenia there are classic and transport apiaries. They are also called pavilions, čmrljak (the word čmrl means bumblebee) or uljnak (meaning beehive). In addition to the classic one, we also know a transport apiary in Slovenia .

Apiaries are a feature of Slovenian culture and architecture. They first appeared in the second half of the 17th century and became an integral part of the tradition of beekeeping together with the stacking of  hives. They are also an integral part of the traditional Slovenian rural cultural landscape and urban gardens. The architectural features of the Slovenian apiary are its wooden construction and typical jutting single-pitched roof.

The wellbeing of bees and successful beekeeping is influenced by numerous factors, such as climate, microclimate, topography, grazing conditions throughout the year, disturbances, access, neighbours etc. Therefore, the choice of location for positioning an apiary is very important.

Experienced beekeepers have always placed apiaries in a prominent, but sheltered, area, with the front facing towards the south or southeast, where the sun already shines by 11am. Therefore, the most suitable areas are those that provide pollen for the longest period, and where there is at least one main pasture to which they must have unhindered access. It is recommended that apiaries are positioned close to running water. Beekeepers must be able to have easy access year-round, whilst bees, especially during winter hibernation, require as much peace as possible.

Anton Janša is considered the greatest Slovenian beekeeper. His birthday was on 20th May, and in 2017 this date was officially announced as World Bee Day. 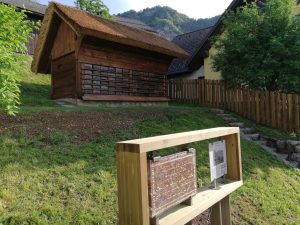 Guided tour of the beehives and decorated beehive panels. Tickle your taste buds by tasting honey-wine at the beehives.

To spletno mesto uporablja piškotke za boljšo uporabniško izkušnjo. Če boste spletno stran uporabljali še naprej, s tem privolite v njihovo nadaljnjo uporabo.. This website uses cookies to improve your user experience. If you continue to use the website, you agree to the further use of the cookies. OK