The Forgotten Village on Ajdna

Ajdna is a stony outcrop beneath Mt. Stol.The legend about the Ajdna maiden has long been a source of disquiet for locals. In bygone days people wondered who lived up there and how and why they had to retreat to such an inaccessible place. The path to Ajdna over an exposed cliff was until fairly recently only known to a few locals, thus the archaeological site has remained intact.

Andrej Valič, an experienced field archaeologist, first climbed up to Ajdna with hunters in the 1970s. Beneath the dense overgrown scrub and undergrowth he identified the remains of ancient houses. In 1976, archaeological research began under his leadership. The discoveries were followed with great interest by the entire profession and especially by the surrounding locals. The remains of a late Antiquity village from 1,400 years ago were discovered. When the excavations were finished and the rare, albeit extremely attesting finds were taken to the Gorenjska Museum in Kranj, they provided many answers. However, it also resulted in many new questions being asked. 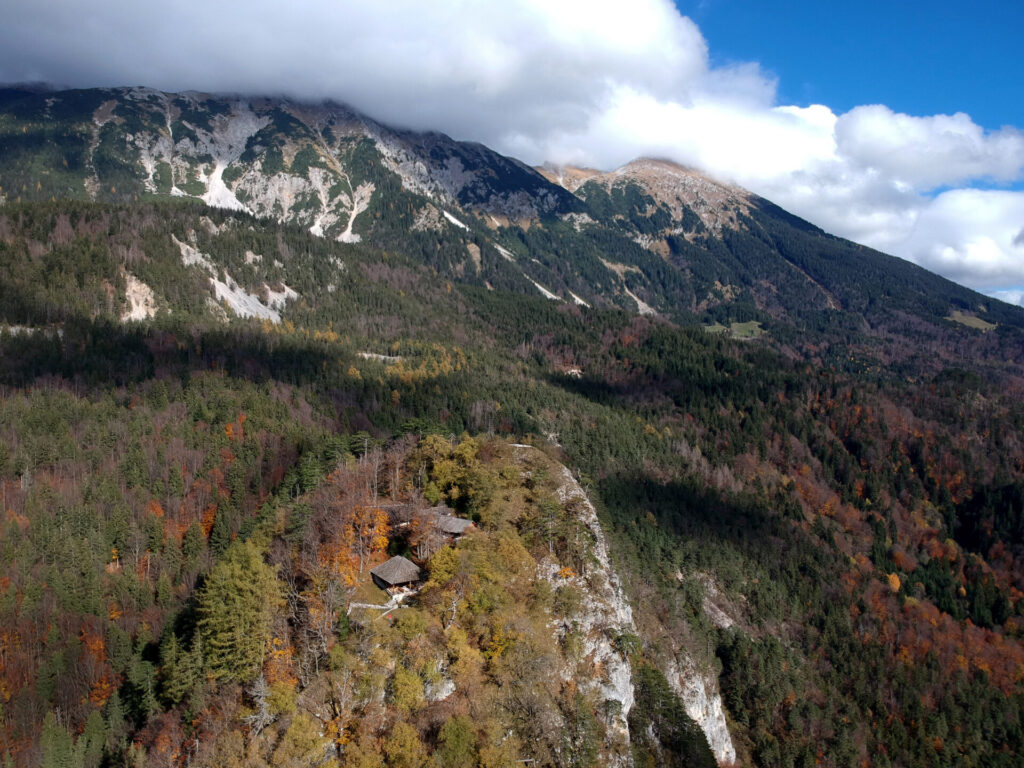 The archaeologists had planned to cover the remains of the walls on Ajdna with earth. However, enthusiastic about the ancient heritage, the locals insisted that the research should continue and a reconstruction of at least one of the buildings should be erected on the site. Extensive, expensive and extremely demanding conservation work began under the auspices of the Institute for the Protection of Monuments in Kranj, which was led for many decades by Milan Sagadin. Along with the individual interventions, several other excavations were carried out, in which the Slovenian Academy of Sciences and Arts and the Gorenjska Museum were also involved. The last excavations took place between 1999 and 2004. Unexpectedly, objects were unearthed from the 9th century, from the time of the Old Slovenian principality of Carniola with its centre in Karni (today’s Kranj).

The excavated material is kept by the Gorenjska Museum in Kranj and is included in the permanent exhibitions Železna nit (Iron Thread) and Prelepa Gorenjska (Beautiful Gorenjska). Due to the popularity of Ajdna, which locals like to visit often, there had long been talk of setting up a small exhibition in Žirovnica, where it would be possible to learn more about the ancient village below Mt. Stol. Thus, in 2016, the Ajdna Museum Room was created in Čop’s Birth House in Žirovnica

The Ajdna Museum Room features original objects and copies through which, in pictures and words, a short story is displayed about the small village, which offered locals a safe refuge in the lap of the mountains two and a half millennia ago. Some of the finds prove that Ajdna was inhabited as early as during the early Roman Empire. A tiny bronze buckle in the shape of a bird, whose faithful image flutters in a hologram in the middle of the exhibition with the help of modern information technology, was made during the early Roman Empire. Perhaps it was actually just brought to Ajdna, however, since other objects from this period have been discovered, it is more likely that some dwellings stood on the rocky outcrop more than 1,900 years ago, during the early Roman Empire. 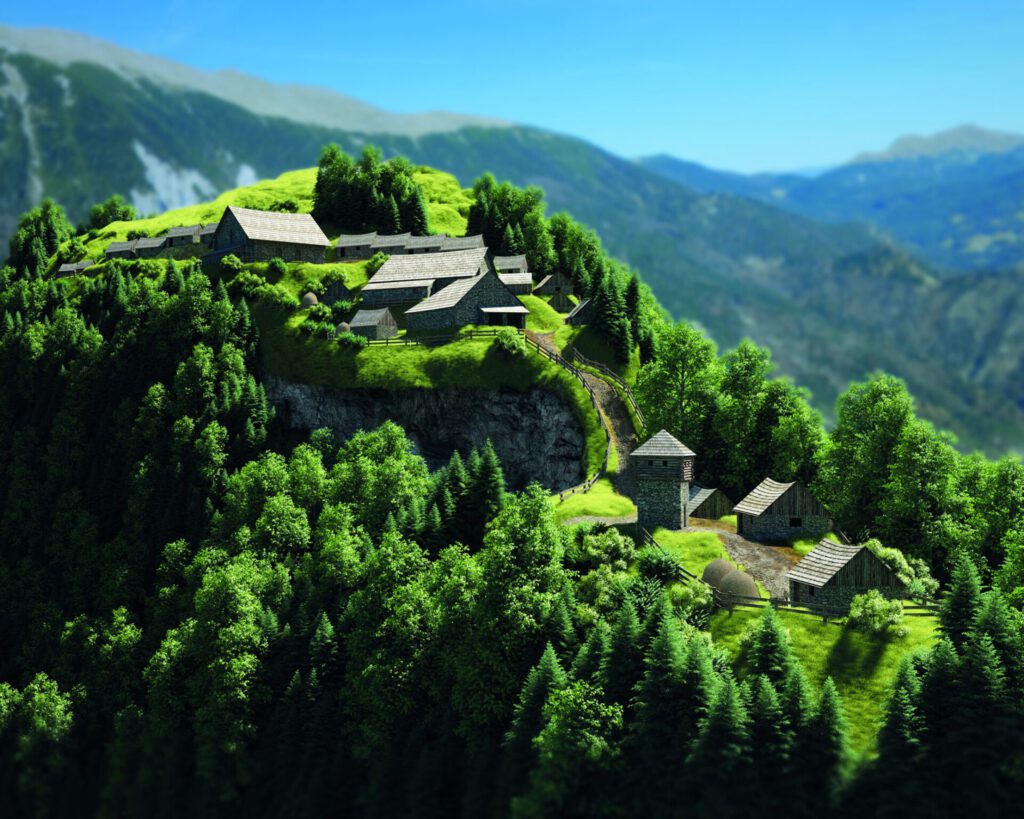 The village flourished in the turbulent times of Late Antiquity, when military gangs raided the valleys on their way to Italy. The latest research explained the destruction of the small village on Ajdna, which disappeared in the flames of the invaders at the end of the 6th century. Who were the attackers? Slavic tribes who were invading towards the West? A section of the mercenary Byzantine army? A gang of thugs who looted for a living? We don’t know.

One thing is certain: a handful of brick houses, wooden cottages and a church disappeared in the flames. Ruins remain where a group of horsemen took refuge in the 9th century.. Spurs, sword hangers and other fetters discovered on top of Late Roman ruins are typical equipment used by the old Slavic nobility. It can be concluded that the Frankish army took revenge on a handful of rebels on Ajdna from the Principality of Carniola. It is known from historical sources that the Upper Sava population joined the rebellion of Prince Ljudevit Posavski in that against the Franks in 820. After the victory over the rebellious prince, the Frankish army pursued the remnants of the army. It is most likely that the rebels found their last, fatal refuge in the eagle’s nest under Stol. 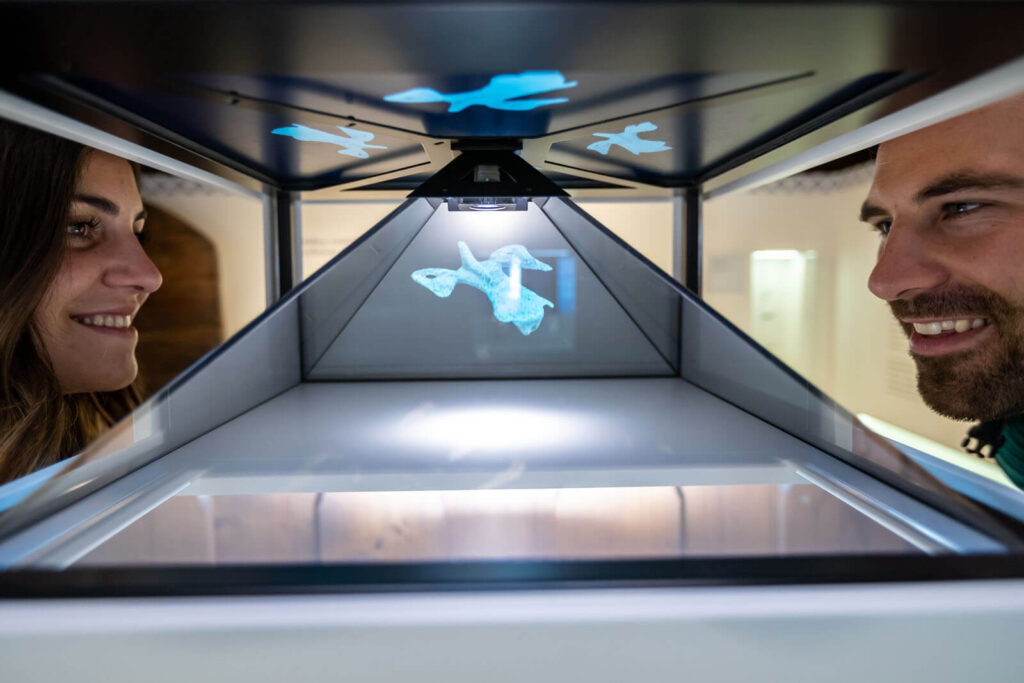