A 30-minute walk from the Valvasorjev dom mountain hut is the Ajdna archaeological park – one of Slovenia’s most prominent archaeological sites that provides a window into Late Antiquity and Middle Ages, located on a 1,064m high precipitous summit. The settlement of Ajdna has a special position among similar sites in Slovenia due to its extreme location and preservation of the facilities. Excavations have uncovered the remnants of an old walled Christian settlement, including 25 buildings and an early Cristian church from the 5th or 6th century. The site sheds light on the plight of early Romanised inhabitants who sheltered in the region’s rugged landscape from marauding Germanic tribes.

The climb to the top of Ajdna is challenging but also very rewarding as the views which extend to the Julian Alps and Lake Bled are magnificent. For more leisurely orientated travellers many of the artefacts and objects found during archaeological excavations are on display today in Matija Čop’s birth house in Žirovnica. The Ajdna museum room stirs the imagination. A special enigma is the grave of a young woman buried with her jewellery inside the church. Was this the famous Heathen maiden (Ajdovska deklica)? The bronze broche in the shape of the bird (the main symbol of the exhibition) does not provide the answer. Instead it invites you to discover the mysterious atmosphere of Ajdna.

The Ajdna museum room was created in 2016 in co-operation with the Žirovnica Institute for Tourism and Culture, The Municipality of Žirovnica, the Gorenjska Regional Museum in Kranj and the Institute for the Protection of Monuments in Kranj. 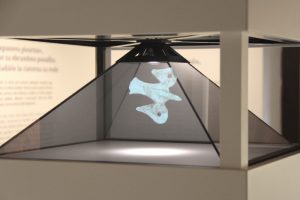 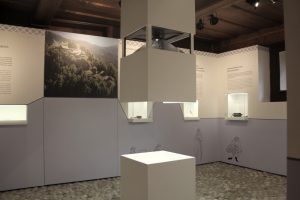 To spletno mesto uporablja piškotke za boljšo uporabniško izkušnjo. Če boste spletno stran uporabljali še naprej, s tem privolite v njihovo nadaljnjo uporabo.. This website uses cookies to improve your user experience. If you continue to use the website, you agree to the further use of the cookies. OK