To Lawrence For Stunning Views!

The mysterious ruins on a hill above the village of Žirovnica stirred the imaginations of locals, even as children. Is that pile of stones all that remains of a once mighty castle of a brave knight? Today, for some, an afternoon walk up to St. Lawrence’s church is part of their daily routine, which revives body and soul. On taking in the views of the Gorenjska countryside, Lake Bled, the Jelovica and Pokljuka plateaus and the Julian Alps in the background one can’t help but exclaim: ‘There’s nowhere more beautiful in Gorenjska.’

Attractions along the way:

Grandma’s story-telling dispelled children’s imagination about the fairytale-like origins of the ruins, since it was explained that they belong to St. Lawrence’s church, which was erected on the slopes of Peči above Breznica as far back as the 14th century. On finding this out, the ruins lost their attraction for children, but they again became interesting when restoration work began 30 years ago. Many children from the surrounding villages helped with the building work; instead of going to religious education in the afternoon, they enjoyed helping to carry the bricks to the work site. In three years, thanks to locals’ dedicated campaigns, a beautiful new church, built according to the original appearance, arose from the ruins.

If you are coming by car, you can park in front of the Žirovnica primary school in Zabreznica. In front of the entrance to the school you will be greeted by five bust statues of the famous men of Žirovnica, with Dr. France Prešeren at the helm. After that cultural introduction, head up to the hill above the village by taking the path to the left of the school then turning right at the end. 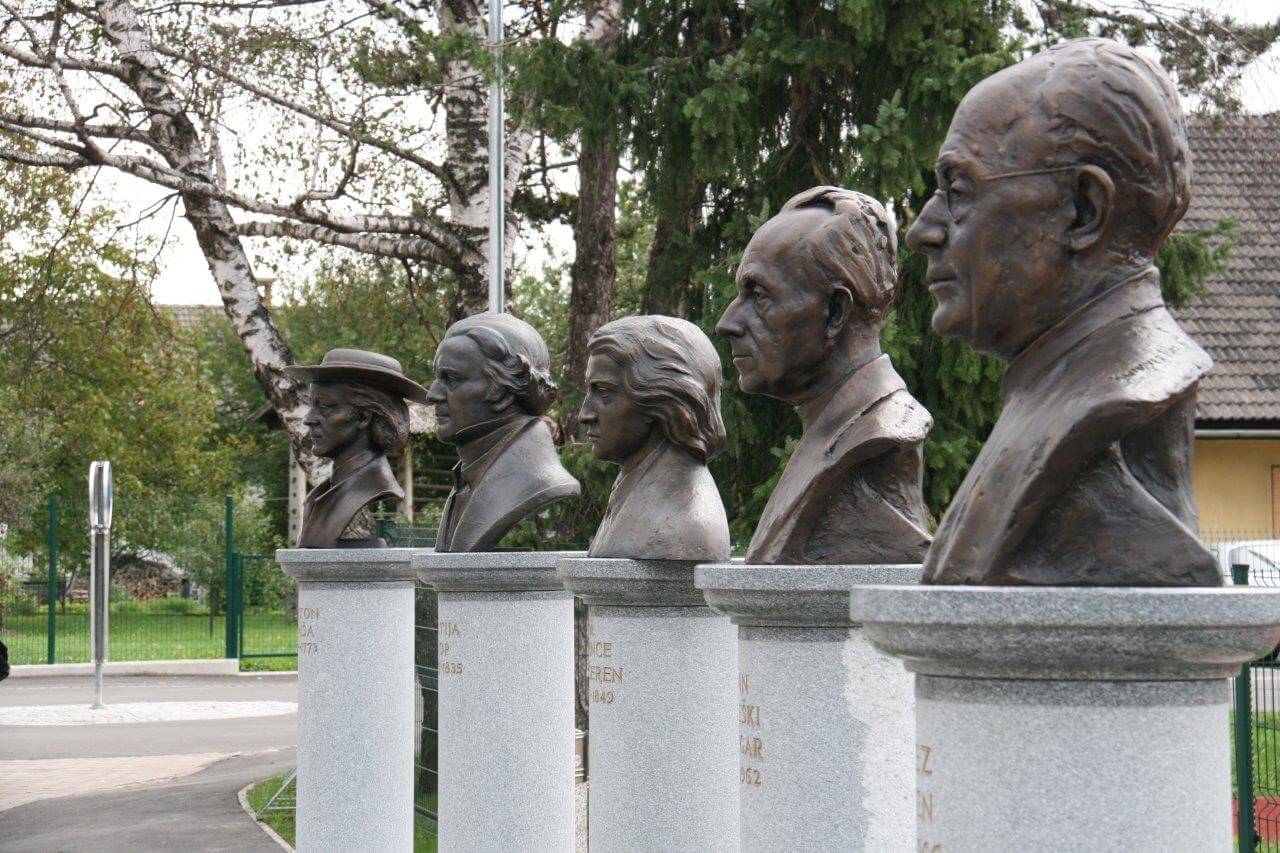 The Avenue of Famous Men in front of Žirovnica primary school

The windy road leads up to the top of the village, where at the last house you turn right onto a meadow. 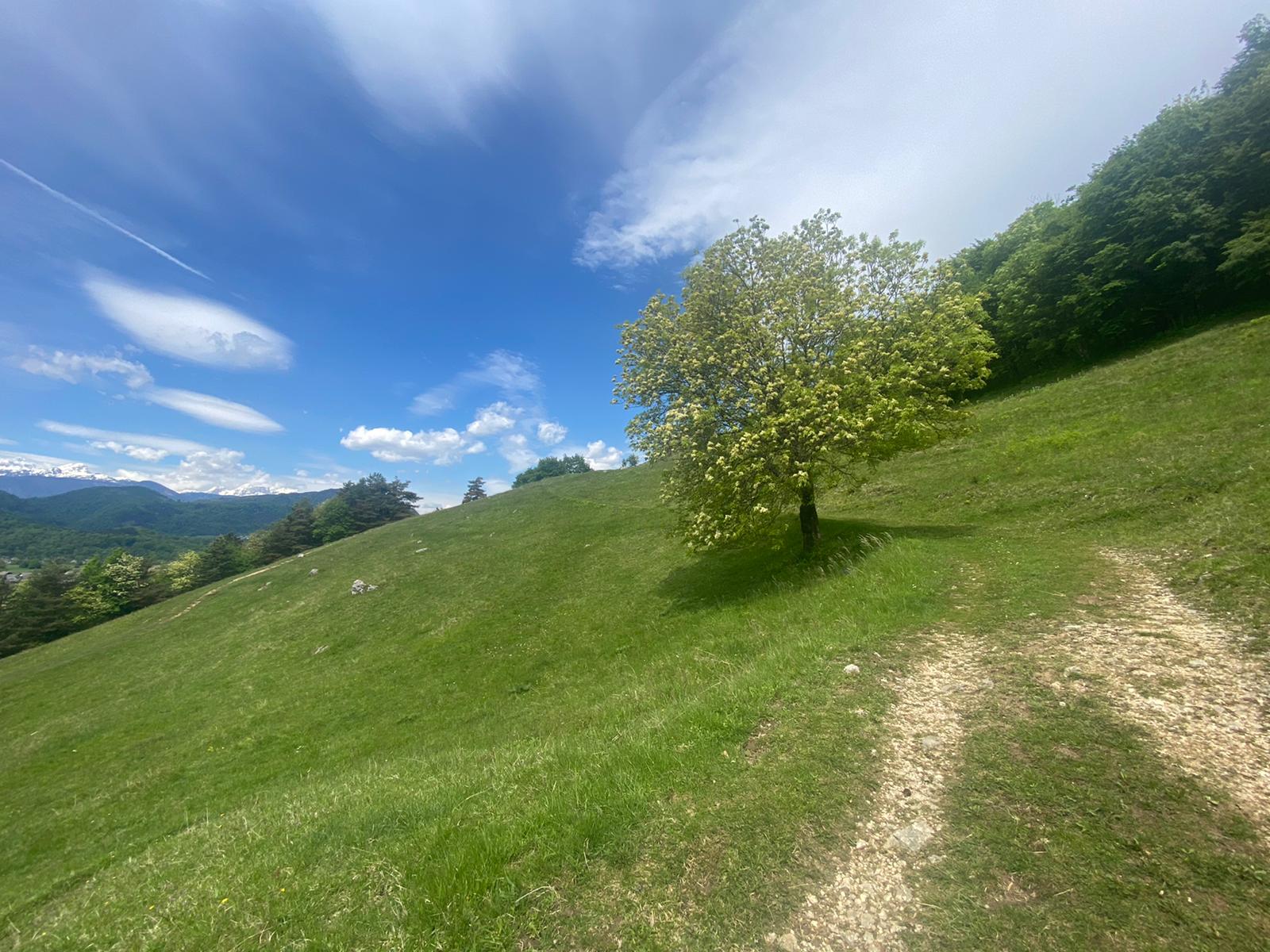 At the last house turn right onto a meadow

Continue on the path to the first turning to the left, which leads steeply up to the top of the hill, where you are greeted by an imposing crucifix. Follow the level path past the crucifix then continue uphill on the path for a further 20 minutes through the forest to reach your goal. 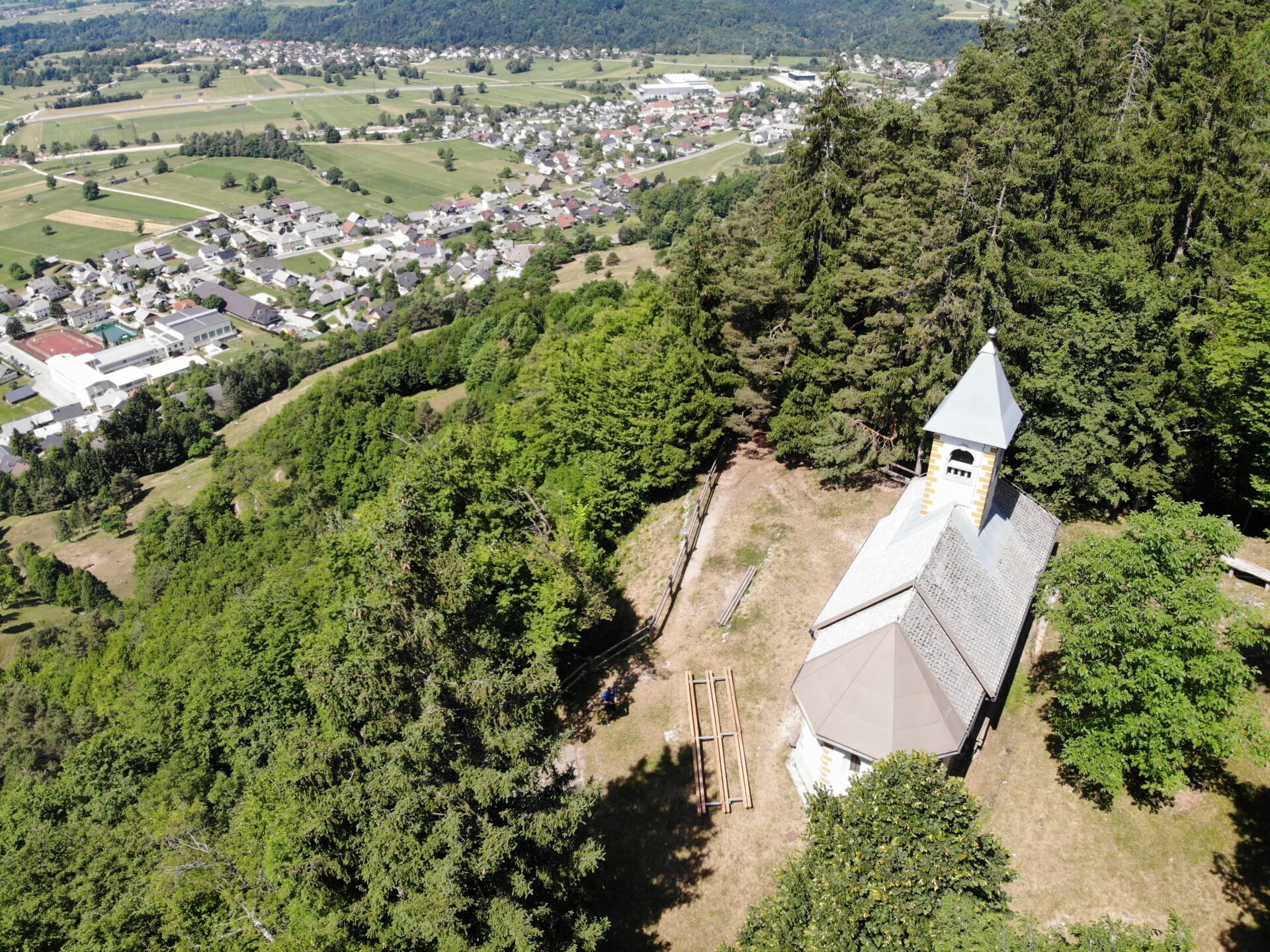 On reaching the top be sure to sign the visitor book hidden in a small chest beneath the wishing bell, then take a rest on one of the benches from where you can admire shimmering Lake Bled surrounded by vast plateaus and mountain tops. 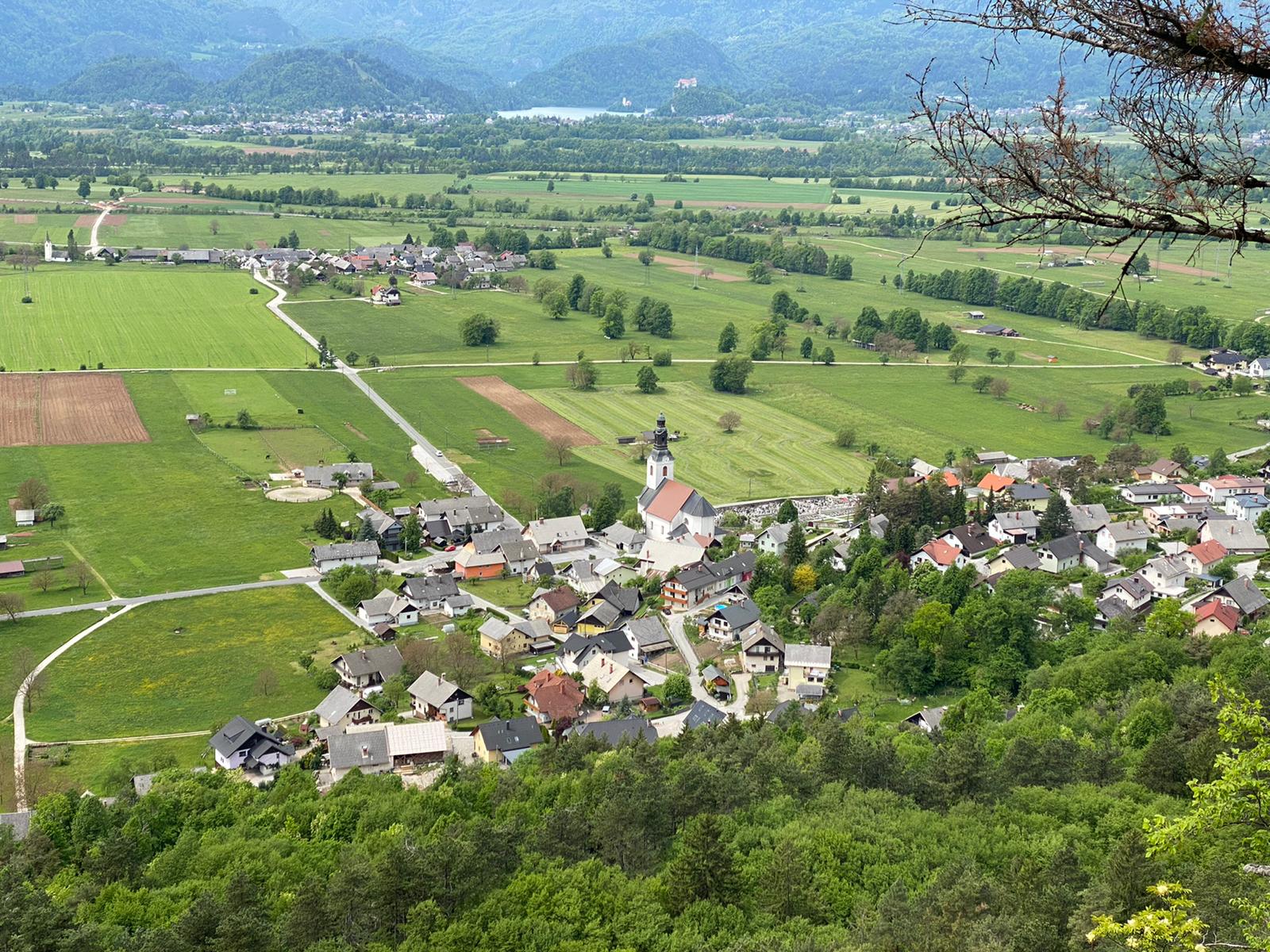 View: Breznica and Vrba with Lake Bled, the church on the island, and Bled Castle in the background

If the sun’s rays awaken a desire in you for ice-cream, you can head back down the same way to the valley and stop at the Sevška kavarna café, where there are treats for the sweet-toothed of all generations.

Families with slightly older children can extend the walk to St. Lawrence’s church by ascending to Mali vrh, which is located directly above the church, and then onwards to Gosjak, from where there is a sun-drenched path back to the meadow above Breznica. It’s not far from here to Zabreznica – not via the meadow, not via the road. Doing so will extend your walk by an hour, therefore allow at least two hours to return to the start, including stops to explore and admire the wonderful nature. 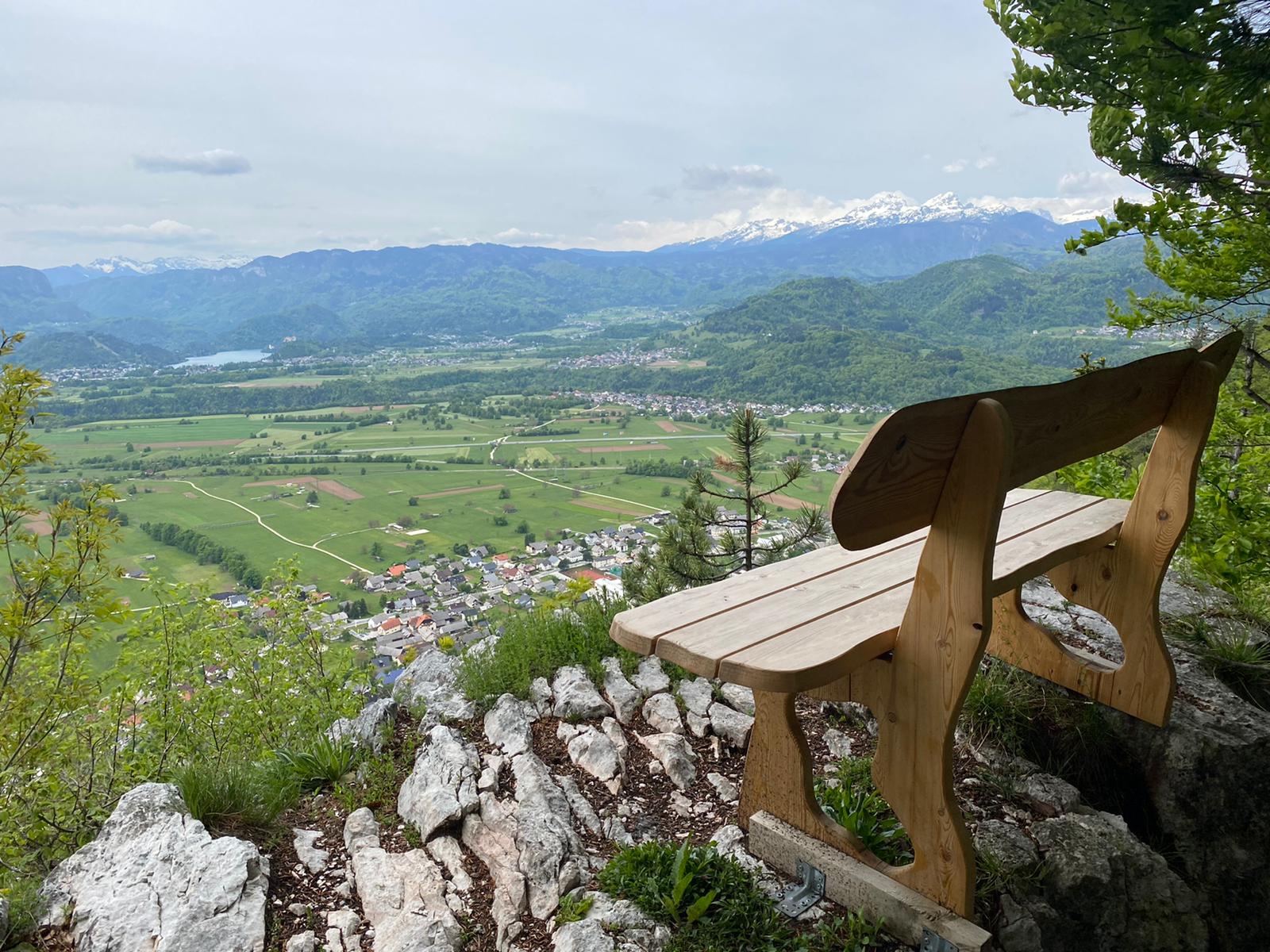 A bench with a view on Gosjak 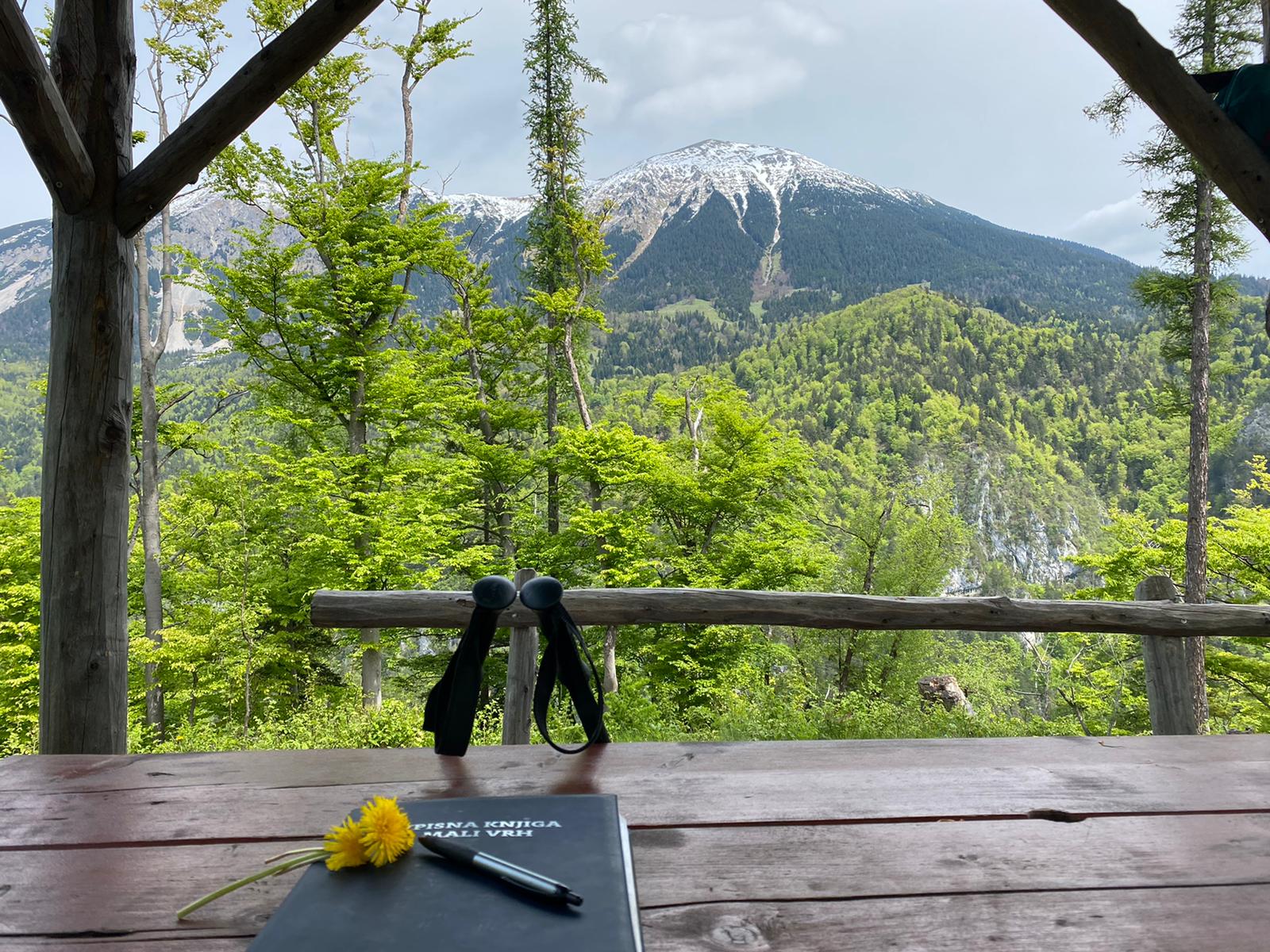 A view of Mt. Stol from Mali vrh from where you can also head down to the Zavrsnica valley